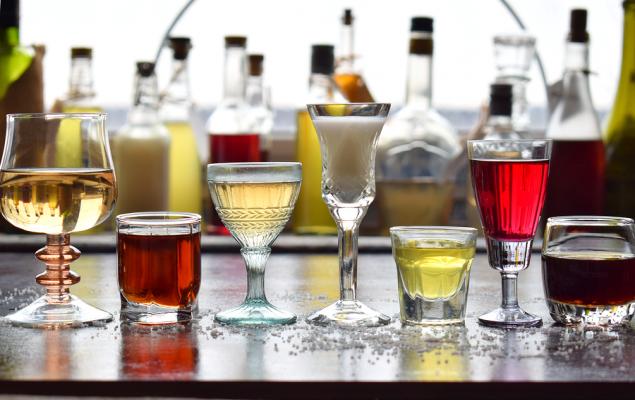 Constellation Brands posted fiscal third-quarter comparable earnings of $3.12 per share, which rose 1% year over year and surpassed the Zacks Consensus Estimate of $2.70. On a reported basis, the company’s earnings per share were $2.48, which included Canopy Growth equity losses of 31 cents. Excluding the impact of Canopy Growth, it posted comparable earnings of $3.42 per share, up 8% from the year-ago period.

Net sales declined 5% to $2,320.6 million but beat the Zacks Consensus Estimate of $2,290.3 million. Organic net sales were up 4% year over year. Organic sales benefited from robust growth in the beer business, and organic sales growth in the wine and spirits business.

The company’s beer business reported sales growth of 4.5% to $1,752.6 million, including a 3.1% increase in shipment volumes and an 8.4% depletion of volume growth. Sales growth at the segment was driven by robust consumer demand for its iconic brands. Depletion volume benefited from continued strength in Modelo Especial and extraordinary growth for Corona Extra.

Depletion volume increased 13% for Modelo Especial and 11% for Corona Extra. Modelo Especial became the No. 1 beer brand, thus strengthening its leadership position in the high-end category. It was also the largest share gainer in dollar sales in the U.S. beer category in IRI channels. Meanwhile, Corona Extra was the second leading import share gainer and ranked the third brand in the high-end in IRI channels.

Sales in the wine and spirits segment decreased 25% to $568 million in the fiscal third quarter. Organic net sales for the segment rose 3%. Organic net sales growth was driven by gains from consumer-driven innovation initiatives. Solid performances by The Prisoner Brand Family, Kim Crawford and Meiomi were key growth drivers.

In the past three months, shares of this Zacks Rank #3 (Hold) company have rallied 17% compared with the industry’s growth of 11.8%. 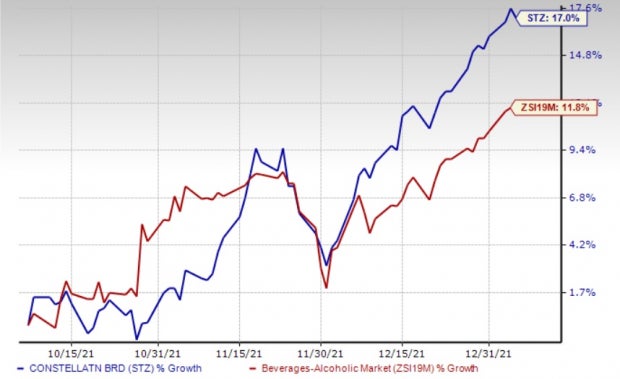 The operating margin in the beer segment contracted 130 bps to 41.3% due to higher cost of goods sold (“COGS”) related to the higher material and brewery costs, as well as increased depreciation. This was somewhat negated by favorable pricing and timing of marketing spending.

The wine and spirits segment’s operating margin expanded 140 bps to 25.4%, owing to favorable fixed-cost absorption, mix benefits from divestitures, and favorable pricing resulting in lower COGS. This was partly offset by increased marketing and SGA expenses, as a percentage of sales, as well as unfavorable product mix from the existing portfolio.

Constellation Brands ended the fiscal third quarter with cash and cash equivalent of $361.3 million. As of Nov 30, 2021, it had $10,083.8 million in long-term debt (excluding current maturities), along with total shareholders’ equity (excluding non-controlling interest) of $11,238.3 million.

On Jan 5, 2022, the company announced a quarterly dividend of 76 cents per share for Class A stock and 69 cents for Class B stock. The dividend is payable on Feb 23 to its shareholders of record as of Feb 9.

The company now expects net sales for the wine and spirits business to decline 21-22% compared with 22-24% decline anticipated earlier. It continues to anticipate a 23-25% decline in operating income for the segment. Organic sales for the wine and spirits segment are likely to grow 4-6% compared with 2-4% growth mentioned earlier.

Constellation Brands expects to generate operating cash flow of $2.4-$2.6 billion for fiscal 2022, while free cash flow is estimated to be $1.4-$1.5 billion. The company plans to incur capital expenditure of $1-$1.1 billion in fiscal 2022, including $900 million targeted for the Mexican beer operations’ expansion activities.

The company outlined plans for incremental capacity expansion in Mexico to support growth of its high-end Mexican beer portfolio. It anticipates total capital expenditures of $5-$5.5 billion for the beer business in the fiscal 2023 to fiscal 2026 time frame. This includes the earlier-stated annual capital expenditure guidance of $700-$900 million for the beer business for the fiscal 2023 to fiscal 2025 time frame. The latest expansion will support additional capacity of 25-30 million hectoliters and includes the construction of a new brewery in Southeast Mexico in Veracruz. It also targets continued expansion and optimization of the existing Nava and Obregon breweries.

In a separate release, Constellation Brands signed a brand authorization agreement with Coca-Cola to manufacture, market and distribute the new FRESCA Mixed cocktails in the United States. Through the deal, the companies plan to bring Coca-Cola’s FRESCA brand, which currently is a grapefruit-flavored citrus soft drink, into alcoholic beverages line. The FRESCA Mixed cocktail(s) is expected to be launched later this year in the United States. The drink will be a spirit-based, ready-to-drink cocktail, in sync with the emerging consumer trends.

Constellation Brands expects adult alternative beverages, including ready-to-drink cocktails, to grow at a 15-17% CAGR in the coming three years. The segment currently has an $8-billion share.

The launch of FRESCA Mixed will fortify Coca-Cola’s plans to expand in the alcohol space. Coca-Cola remains committed to exploring new products to expand its portfolio through customer-centric innovation. Earlier, it had launched the Topo Chico Hard Seltzer in Latin America markets and the United States, in partnership with Molson Coors Beverage Company ( TAP - Free Report) .

A better-ranked stock to consider from the broader Beverages – Alcohol industry is Diageo ( DEO - Free Report) . The company has a Zacks Rank #2 stock and has gained 13.6% in the past three months. DEO has an expected EPS growth rate of 9.2% for three-five years.

The Zacks Consensus Estimate for Diageo’s current financial-year sales and earnings per share suggests growth of 30.7% and 13.5%, respectively, from the year-ago period's reported numbers.

In addition to the investment ideas discussed above, would you like to know about our 10 top picks for the entirety of 2022?

From inception in 2012 through 2021, the Zacks Top 10 Stocks portfolios gained an impressive +1,001.2% versus the SP 500’s +348.7%. Now our Director of Research has combed through 4,000 companies covered by the Zacks Rank and has handpicked the best 10 tickers to buy and hold. Don’t miss your chance to get in…because the sooner you do, the more upside you stand to grab.