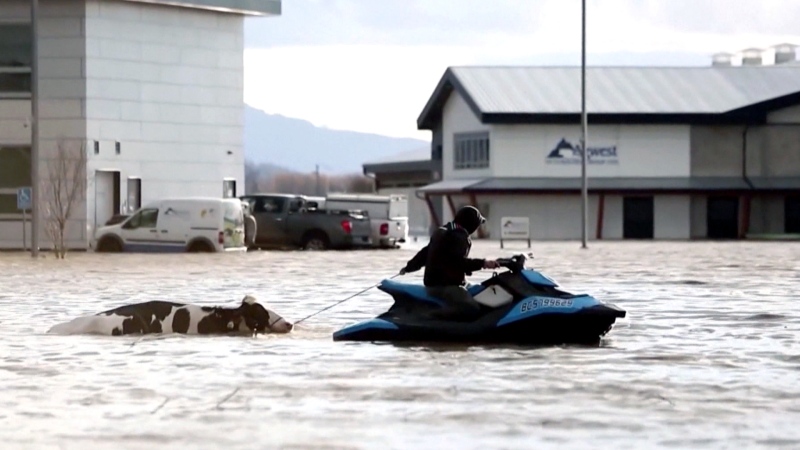 With the official start of summer just a couple days away, Environment Canada is predicting we’ll be in for some “beer-drinking weather” with a warmer summer than usual — but storms could pop up.

“Our models show that for most of the country, we’ll be able to put the label ‘warmer than normal’ from almost coast to coast,” Dave Phillips, senior climatologist at Environment Canada, told CTV News Channel on Sunday.

“Certainly for most of Canada, going forward, it’s going to be more kind of beer-drinking weather, beach weather, and I think Canadians kind of appreciate a summer like that.”

We’re already seeing some of this warmer weather across Canada. There are currently heat warnings in place in southern Manitoba and in parts of northern Ontario near the Manitoba border in particular.

The Manitoba Marathon was set to take place this Sunday, but shortly after the race started, temperatures soared above 30 degrees, and organizers called it quits due to safety concerns.

Manitoba “wants it to dry out,” Phillips stated, as the province has struggled with floods recently, “and it’s starting to do that.” But the jump in heat in this region right now is dramatic.

“Winnipeg could see 37 degrees today, which is 13 degrees warmer than it normally than it would be, and I think warmer than any moment last year,” Phillips said.

Throughout the spring, Canada has seen a wide range of weather.

“This past week, we’ve seen snowfall totals of 30 cm of snow in the Rockies, we’ve seen actually threatening rain in parts of southern Alberta […] that was sort of good news for farmers and growers. And certainly here in the east, about a month ago we had this wind storm […] that was one of the most expensive storms in Canadian history, and then this past week we had thunderstorms and near misses and Montreal got heavy amounts of rain and standing water,” Phillips said.

“So, we’ve had our share of weird, wild and extreme weather, but I think overall, this spring has been a little on the cool, wet side for most parts of Canada.”

He added that if you look globally, Canada has been “one of the cooler areas of the world” during this first half of 2022.

That is setting us up for a warmer summer.

But one of the big outliers for this sweltering summer is British Columbia, he said.

“The models have improved somewhat to give them more of a summer than they were looking like maybe just a week ago,” he said. “But [it looks] like they’re going to be kind of seasonable, the kind of goldilocks kind of weather: not too hot, not too cold.”

Last year, B.C. had one of the worst wildfire seasons the province has ever seen. By this time in 2021, there had been 277 fires in the province, compared to the 152 wildfires that have occurred so far in 2022. More than 8,700 square kilometres of land was burnt in B.C. in 2021. On top of this, a dangerous “heat dome” in late June and early July of 2021 caused four times the number of deaths the region typically sees during that time, with 619 dying due to the extreme heat. A cooler summer this year will likely be a welcome change.

Phillps added that if things warm up too quickly in B.C., we could in for the opposite of fires: floods.

“I’m concerned that if it warms up too much, too quickly, then they’re going to have some real flooding situations, because they’ve got very high snowpack in the middle and higher elevations in the mountains, and if you go from slush to sweat, well all of a sudden, that snow is going to melt, and you’re going to have rivers that are going to be engorged and streams, and there could certainly be flooding,” he said.

This prediction of a warmer summer for Canada overall, with B.C. looking to be cooler than the rest of the country, echoes The Weather Network’s official summer forecast, which came out at the end of May and predicted warmer weather with a chance of storms.

Phillips noted that whenever there is high heat and an accompanying humidity, we have the conditions for a storm to brew.

“We certainly don’t have forecast for a season ahead in terms of storms,” he said. “We just know that when the warm weather comes with a high humidity, you’re going to get storms breaking out in Canada — so always keep an eye on the sky.”

It seems that while the summer will come with some great beach days across the country, it might be smart to have a back-up plan in case of rain.

Staff Reporter 3 days ago
previous post next post
We use cookies to ensure that we give you the best experience on our website. If you continue to use this site we will assume that this is acceptable. Ok