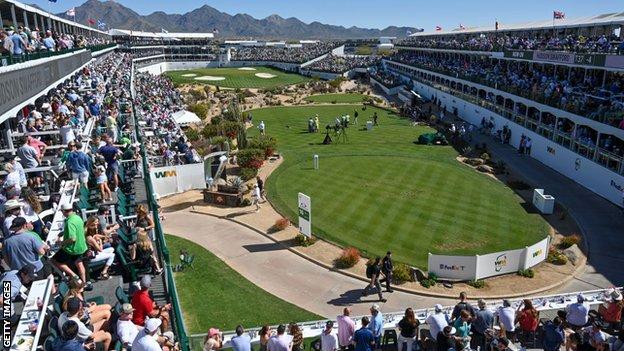 Carlos Ortiz says he was "nailed pretty hard with a beer can" after hitting a hole-in-one as Scottie Scheffler won his first PGA Tour title on Sunday.

Mexican Ortiz's ace came on the par-three 16th at TPC Scottsdale - a hole framed by a stadium-style seating - and fans celebrated by lobbing beer at him.

"It was unbelievable," Ortiz said. "I didn't know how to react.

"A lot of people cheering for you, then you are watching out for your head. I was just trying to avoid all the cans."

Around 20,000 fans pack the stands around the hole, creating a boisterous atmosphere and showering players, caddies and officials with beer and water to reward good shots.

Some players revel in the chaos.

Harry Higgs lifted his shirt over his head to celebrate holing a 10-foot putt par putt and fans responded by throwing dozens of cans of beer towards the green.

His playing partner Joel Dahmen went one step further, taking his shirt off and waving it above his head before taking a gulp of beer from one of the cans.

The pair were carrying out a promise they had made a day earlier when realising they would be playing together in the final round, with Dahmen saying Higgs would remove his shirt if they got enough supportive tweets.

Ortiz, who followed his eagle on 16 with another on the par-four 17th after driving the green, finished on eight under par, well behind Scheffler who holed a 26-foot birdie putt to beat fellow American Patrick Cantlay on the third play-off hole and win the Waste Management Phoenix Open in Arizona.

The 25-year-old Texan had four birdies in his final six holes as he tied with Cantlay on 16 under after both players closed with five-under 67s.

Both missed birdie putts on the 18th to get to 17 under and played the 18th three times before Scheffler won.

"It was such a fun week and I'm very pleased," he said.

"Patrick is obviously a phenomenal player, and I knew one of us was going to have to make a birdie. Par wasn't going to do it so I knew if I had an opportunity I really had to take advantage of it."

Scheffler's birdie came after he found a fairway bunker with his tee shot but he was able to hit the green with his second and hole the putt.

Sahith Theegala, who led after three rounds, shot a two-under 70 to finish joint third with Brooks Koepka (69) and Xander Schauffele (68) on 15 under. 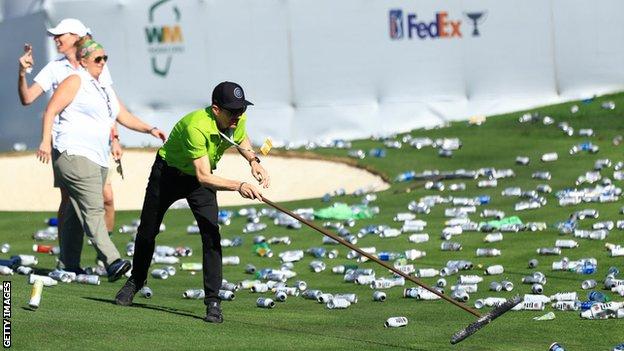