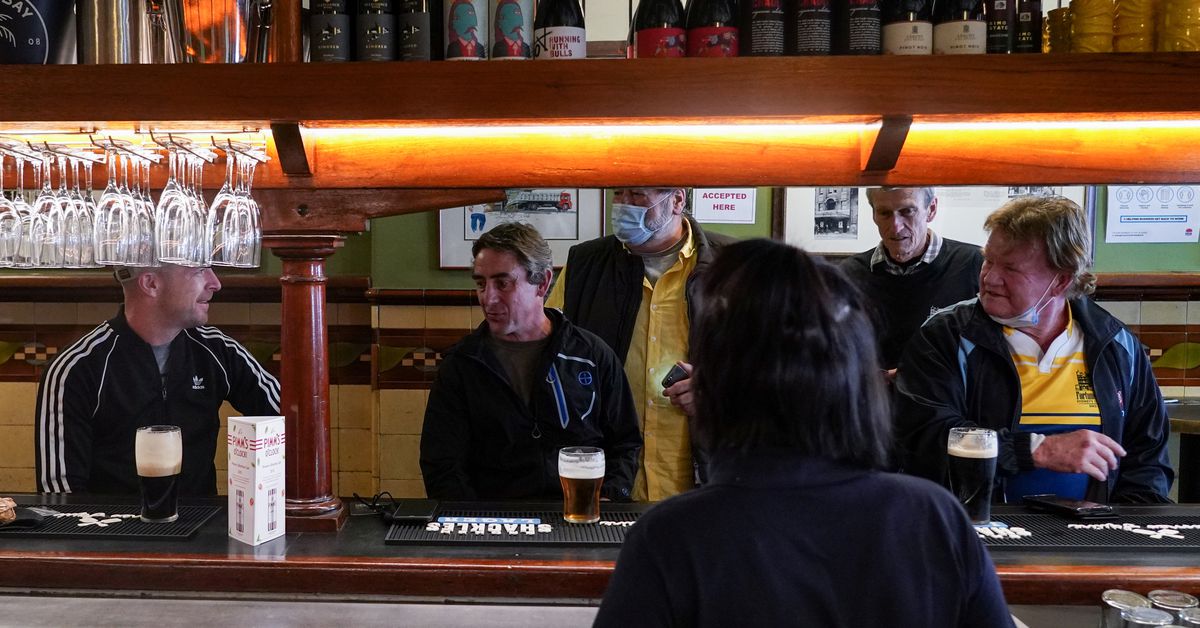 Customers chat over beers at the Fortune of War pub, on the first morning of pubs and many other businesses re-opening to vaccinated people, following months of lockdown orders to curb an outbreak of the coronavirus disease (COVID-19), in Sydney, Australia, October 11, 2021. REUTERS/Loren Elliott

SYDNEY, Oct 11 (Reuters) - Sydney's oldest pub opened one hour early on Monday to welcome back its regulars after the city emerged from a more than 100-day lockdown, allowing COVID-19 vaccinated locals to enjoy new freedoms including a morning beer at their favourite bar.

Soon after doors opened at 9:00 a.m. (2200 GMT Sunday), a handful of customers filled up one side of the bar at the Fortune of War, an almost two century-old pub looking out towards Sydney's main ferry and cruise ship wharf in The Rocks precinct.

"It's the Aussie way. You know, come to the pub, have a beer, have a bit of a yarn. They talk to staff, they talk to each other," said publican Steven Speed, gesturing towards the customers perched on bar stools.

Speed said no-one can remember when the Fortune of War was last forced to close for an extended period, although he said it was likely during the Spanish Flu pandemic a century ago.

With the once-stuttering vaccine rollout gaining momentum, Australia is planning a staggered return to normal even as its biggest cities grapple with an outbreak of the highly infectious Delta variant.

New South Wales (NSW) state, of which Sydney is the capital, eased lockdown rules on Monday after hitting its 70% target of full vaccination for its adult population. Further restrictions will lift when the state hits the 80% and 90% levels, including the return of international travel.

Australia and neighbouring New Zealand have taken conservative approaches to reopening even though both countries have recorded only modest numbers of infections and deaths, by global standards, during the pandemic.

NSW Premier Dominic Perrottet described Monday as "freedom day" while warning that infections would rise after reopening, as has been the experience elsewhere.

Australia's second-most populous state, Victoria, is preparing to open for summer, authorities said on Monday, which starts in December.

Barbers and hair salons were particularly busy on Monday after a near four-month lockdown, with many businesses inundated with bookings and long queues outside, television footage and social media images showed.

Samo Vojsk, who has been coming to the Fortune of War since 1981 and was there on Monday morning, said the pub offered an escape from the unrelenting pandemic.

"We come here to forget that sort of thing," Vojsk said.

"You miss the ambiance of the pub; it's not the same drinking at home."

"I've been looking forward to this comfort for 108 days," he said.