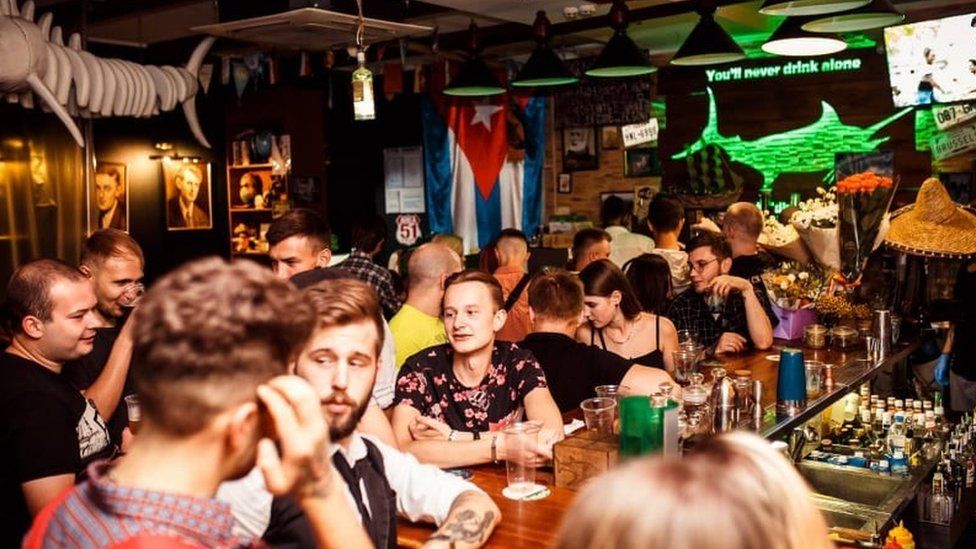 The bar was popular among the city's young creatives

You'll Never Drink Alone were the words that hung above the bar at the Old Hem, an iconic pub in the eastern Ukrainian city of Kharkiv.

The pub is named after Ernest Hemingway, and its patrons would walk past a statue of the legendary American writer on their way in.

It was popular among the city's young creatives, and Serhiy Zhadan, one of Ukraine's best known poets, would often perform and drink there.

But now the Old Hem lies in ruins. 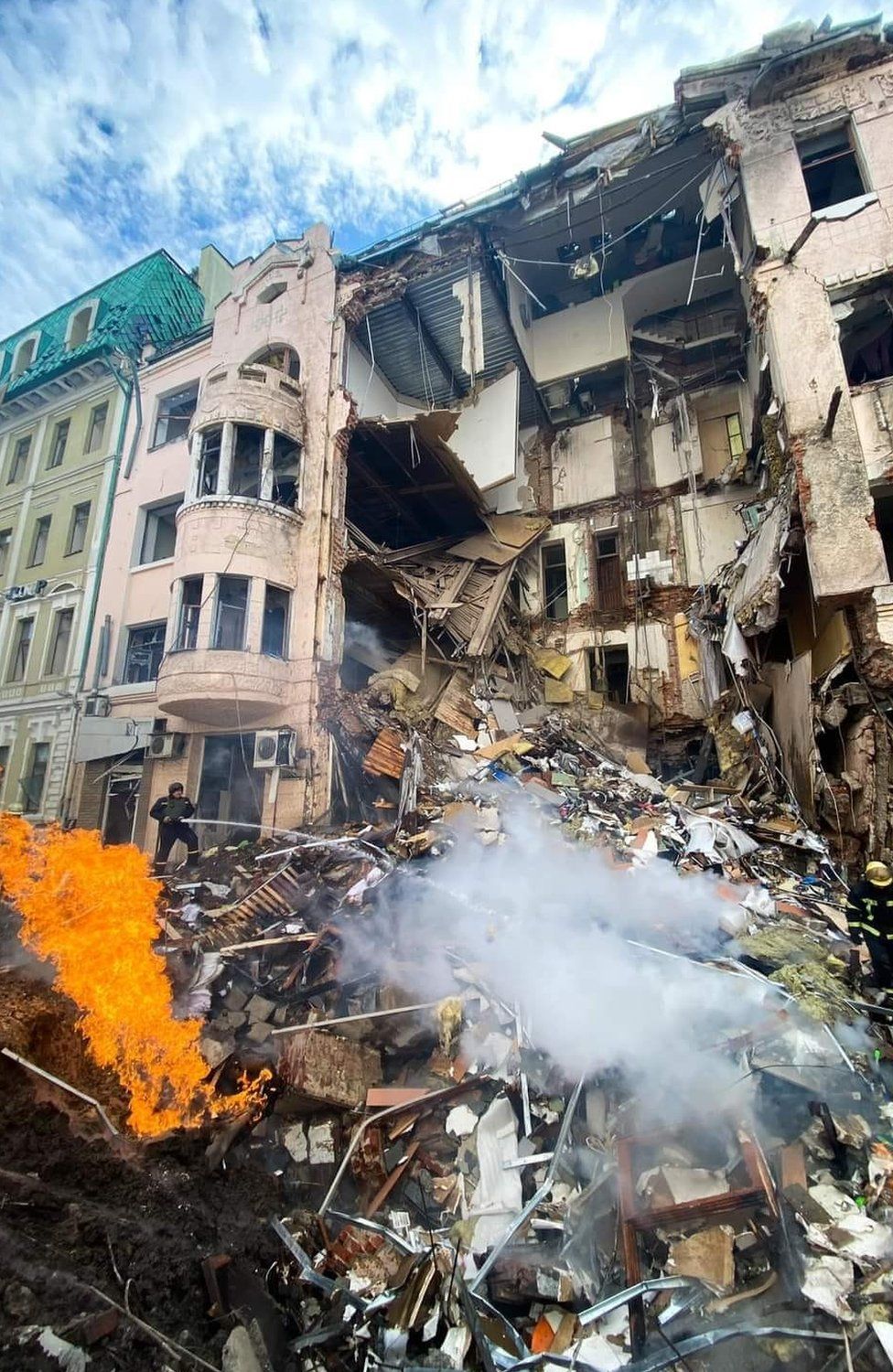 The pub was destroyed in shelling on Monday

It was completely destroyed during Russian shelling of the city on Monday. The Kharkiv prosecutor's office says two people died in the attack.

The bar's owner, Kostiantyn Kuts, told the BBC that no staff were in the bar when the strike hit, and those who died were in apartments above the pub.

He initially hoped that he'd only be shutting up briefly. 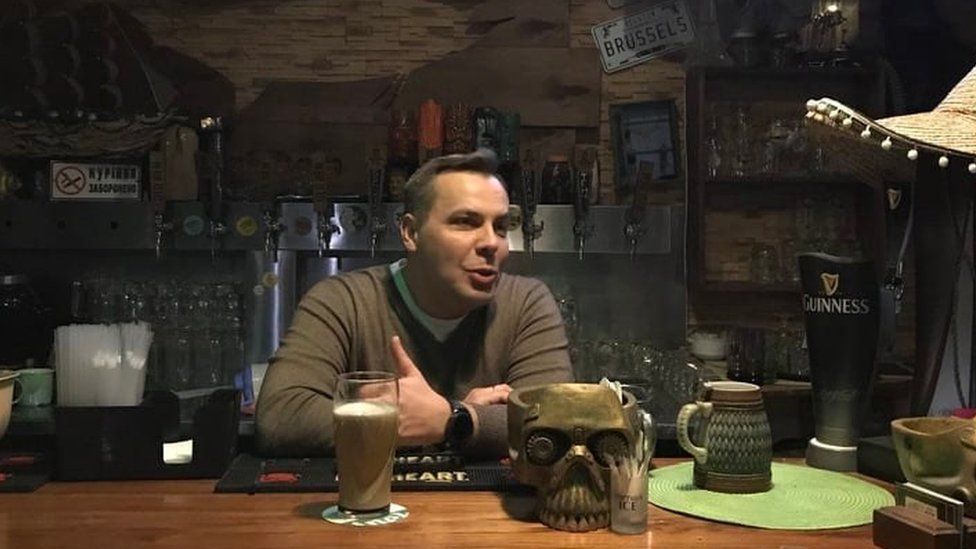 Kostiantyn Kuts founded the bar in 2012

"We did not completely believe in what was happening and hoped that soon the bar would work. But the illusions were destroyed with the first bombs on residential buildings," he said in a message.

In the early days of the invasion, Kharkiv fought back a Russian armoured column. Since then, it has suffered nightly Russian airstrikes and shelling, with dozens of civilians killed and hundreds injured.

Watch: Our correspondent on the front line, with Ukraine’s troops - this report contains graphic images of casualties

But in the weeks leading up to the invasion, Mr Kuts says it was business as usual at the bar.

"The atmosphere was friendly. Many felt at home in the bar," he says. "The pub was popular among young people, and they were all optimistic and did not believe in war."

This homely atmosphere was one the Old Hem had built up over a decade.

Mr Kuts says the pub was opened in 2012 as a place where people could "meet and discuss current affairs over a glass of beer". It soon became a focal point for Kharkiv's creatives and would showcase local talent.

Yuri, who often visited the Old Hem and declined to give his full name, said it was more of a hub than a pub. He recalls musician Oleh Skrypka, vocalist with the ground-breaking Ukrainian rock band Vopli Vidopliassova, playing a rare intimate show. Parties would regularly continue into the early hours.

"It was one of the first places in Kharkiv to support Maidan publicly with flags and manifestos on the doors," he says, in reference to the protest movement that ousted pro-Russian President Viktor Yanukovych in 2014.

"Freedom and democracy combined with cheap beer is why youth loved it I guess," he says. 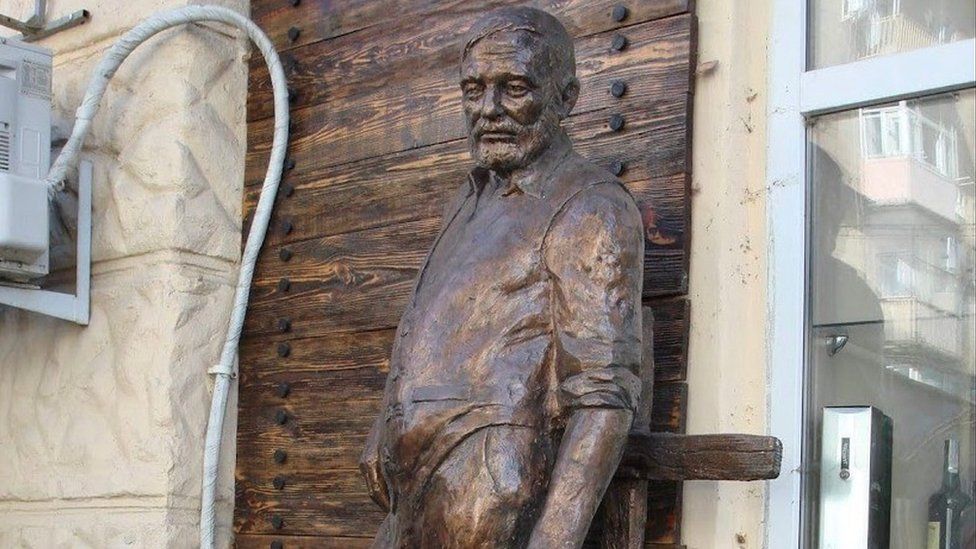 The pub was dedicated to Hemingway

The pub was dedicated to Hemingway, one of Mr Kuts' heroes, and had a statue of the writer at the entrance. The walls of the bar were decked out with portraits of other iconic authors including 20th Century Russian writer Sergei Dovlatov, Charles Bukowski and Mark Twain.

"I was often asked the question - why Old Hem?" Mr Kuts says.

He said this was out of affection for an old friend rather than a reference to his age.

But what really made the bar was the people, he adds. 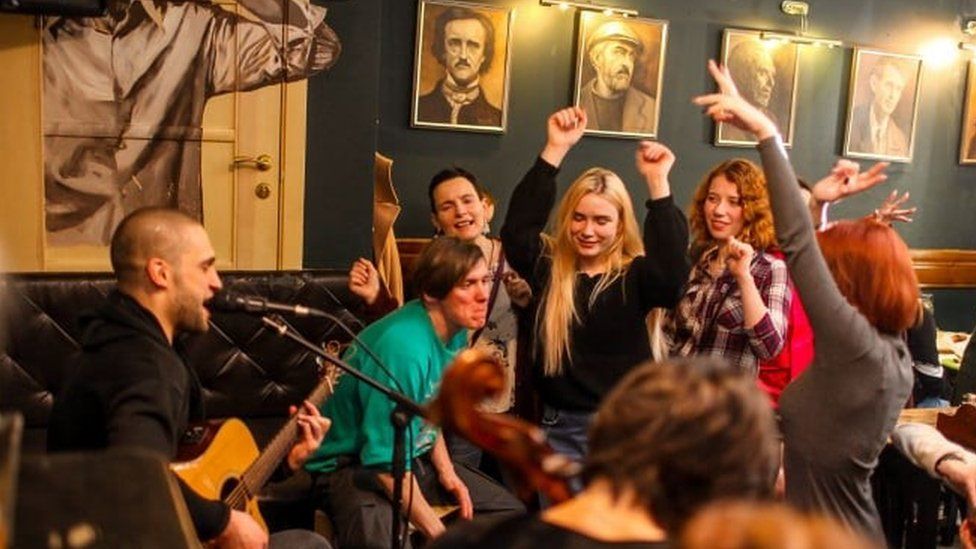 Mr Kuts hopes to one day rebuild his beloved pub

Mr Kuts is now in western Ukraine and is hoping to make it to Germany. But one day he hopes to return to his city to rebuild his beloved bar.

"I'm sure Hem's story didn't end today," he says. "We will win and Hem will rise again."